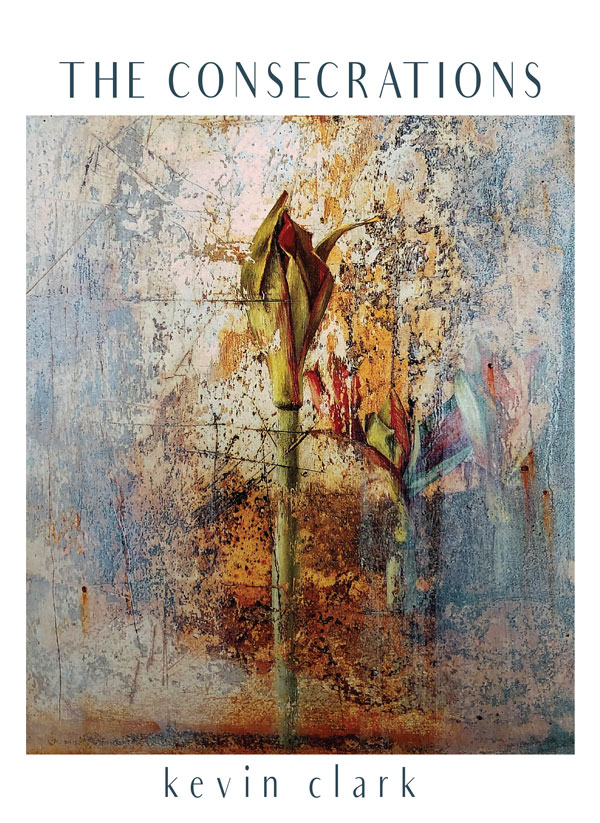 KIM VERHINES: While there’s plenty of variety in The Consecrations—long poems and sonnets, personal and political poems, autobiographical and persona, even a ghazal—I notice that most of the poems start in the material world and ultimately veer into the interior world. Are you aware of how you write while in the act of writing?

KEVIN CLARK: At first, I hope not. When I begin a poem, I hope to be uncritically immersed so the exploration is as intuitive as possible. I must say that later, before I dive into each revision, I may discover that I’m enacting a too-familiar trope of mine. Since I don’t necessarily want to do what I’ve done before, I can feel myself at times wending my way into a new approach.

KV: What is the significance of the title? Does it refer to religious ideas? A higher power?

KC: I was raised Catholic and, in the Catholic Mass, the consecration—that moment when the faithful believe that the bread and wine have become the body and blood of Christ—is the very heart of the belief system. I’m no longer a religious believer, but I know that human beings invest certain acts with sacramental importance, and I don’t necessarily discount realms of existence we may call spiritual. The moments of profound intimacy between lovers, family members, and friends throughout the book—and especially in the title poem—constitute a kind of transcendence.

KV: The book begins with an epigraph from Elizabeth Alexander: “We walk into that which we cannot see.” Many of your poems—in fact much of your work—delve into the metaphysical questions of “that which we cannot see.” Does poetry provide you with a lens with which to examine unknowingness? How do you use poetry to help you resolve or at least come to terms with what are perhaps unsolvable questions?

KC: A few years ago, I wrote an essay which begins, “All verse is inquiry.” So, sure. I believe that poetry investigates the secretive, often inscrutable world and helps to bear witness to what it is that we can see and understand in our limited capacity. I know physicists are searching for a unified field theory, but I suspect that the universe is ultimately inexplicable for us. That is, I think every time we make a discovery about existence, we open new questions. I like the way a good poem illuminates a sliver of our existence, but I recognize that in doing so the poem also uncovers new avenues of inquiry. Readers may see this most overtly in poems such as “In Between” and “The Driver.”

KV: According to your poem “Admitting Belief,” your mother raged against the night when she was confronting an unspecified death. In “Before Dinner,” there’s a similar resistance to mortal tragedy. On the other hand, the poem points out that we must “admit belief” in the fact of death in order to come to some kind of personal equanimity. Is the poem offering up two opposing ways to cope with such inevitability?

KC: Well, in fact, my mother was a fiercely determined, powerful woman, but she was bent with tears the moment she’d heard her father had died of a heart attack at 58. She immediately had us kneel in the living room and, as she cried, we said the entire rosary. It was a foundational experience for me. Confronting death is so personal. But I do think that, in very different ways, both poems promote acceptance while recognizing that sometimes it takes a long time to get there.

KV: Marriage/love/long partnership seems to provide an anchor of meaning against the chaos in this book. In poems such as “In Between,” “Postmodern Nights,” “Materialist Noir,” and the title poem, for instance, the speaker isn’t absolutely sure of much, but he takes sustaining comfort from the presence of his wife. Is love a viable choice you are suggesting for your readers or simply a personal description of how you hold on? Is it real in your mind or is it a winning diversion?

KC: I don’t want to enter into a needless tautology here, but first let me say that we can’t know much about existence—and that includes whether there’s a first cause or not. Or whether we’re stuck in a deterministic universe or if we have free will. We don’t know if all matter has consciousness. Or what’s going to happen tomorrow. Despite such unknowingness, I do know that joy exists and it’s sourced in many things. But nothing in my life is more joyful and thus more sustaining to me than my relationship with my wife.

KV: Each of the longer poems in the book—especially “The Oscillations,” “Dog,” “Amplitude,” and “The Driver”—roams freely in time and place and even theme. How do you keep such multifaceted poems unified? What do you want to do when you commit to a longer poem?

KC: To start with, I want the poem to be interesting from the get-go. I want to find something—a wild assertion or a strange plot device, say—to compel the reader into the poem. Then, voice is key in keeping the poem an organic whole, but one’s voice can shift in tone throughout a longer work. I’m not the first to say that long poems can naturalize the reader to the poet’s voice. And I want theme to be a unifying device as well, but sometimes a bottom-line theme may be hidden for quite a while. To borrow a phrase from theatre, I love the surprise that may occur in “the reveal” at the poem’s closure.

KV: How did you come to put this book together? Did all of these poems come over a short period of time? Was it influenced at all by the pandemic?

KC: The poems were written in the three or four years immediately preceding the pandemic, though in some of the more overtly political poems, such as “Museum of the Morning After,” I recognize the kind of polarizing anxiety so many of us have continued to experience with COVID. Like most poets, I’m writing all the time, and so, when very discerning, very honest friends (and, perhaps, enough magazine editors who say yes) confirm that the poems are bookworthy, I begin the process of organizing a manuscript into shape. This progression typically means I print the poems up and spread them out on my bed and play with winnowing and ordering until I think I have something. Then I confer again with those few key friends who read the whole thing and give me feedback. At that point, I revise and send it out. Happily, both Sara Henning and you liked what you saw here!