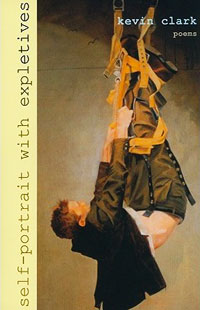 Buy at Amazon Buy at Publisher

Praise for Self-Portrait with Expletives

I swear Kevin Clark’s Self-Portrait with Expletives is the book I’ve been waiting to read—the book in which the past and present are not strangers, but lovers. Clark’s ecstatic poems time-travel with alacrity on their quest for transformation and song. Intimate, hilarious, attentive, political, Self-Portrait with Expletives is a mature, commanding book by a poet confident in his craft. It’s also a book with a wide and wonderful boyish grin.

From these pages flows a warm and breathy voice that sings up the Tuscan countryside but also traffics in the quiddities of hardscrabble Americana: beers drunk, cars wrecked, guns fired, songs sung, lovers kissed and missed. It’s as though there’s nothing this voice can’t say; it’s personal, provocative.

Kevin Clark’s astonishing coming of age stories—in his superb new collection, Self-Portrait with Expletives—seduce us by being consistently brilliant and hilarious, heart-breaking and invigorating. The Sixties and Seventies haven’t been this much fun or nearly so troubling since, well, way back then. These portraits of the self slowly emerging into the complex world of shifting historical times, and the impeccably staged narratives charting the speaker’s own passage into adulthood and mature love, become powerful testaments to what personal freedom can truly come to mean.

Moving seamlessly between the sixties-to-mid-seventies and the present, between a sensuously lived life and a deep sense of mortality, Kevin Clark’s poems perform the magic his passion dictates and his intelligence won’t quite allow: an “open / closure, the kind that improvs it own end- / lessness.” Lush with detail, rich with wisdom, filled with unforgettable people, and held together with masterful syntax, these poems raise narrative poetry to a breathtaking new level of pleasure.

Eight Hours in the Nixon Era